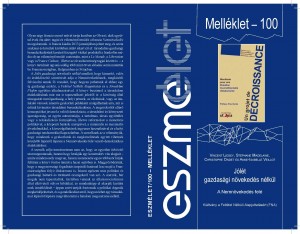 Degrowth; a political, social, and political movement born in France in the early 2000s has become international, mainly in the French-speaking countries (Belgium, Switzerland, Quebec), and the Latin countries (Italy and Spain). Lately, the debate has reached the Anglo-Saxon world as we have observed during the International Conference of the European Society for Ecological Economics held in Barcelona in March 2010, thanks to movements such as Transition Town or some based on voluntary simplicity. Seemingly in the Germanic and Scandinavian countries, many local groups have been formed, like in Bern, whilst more and more meetings are organised: i.e. Helsinki, September 2010, with Serge Latouche. This internationalisation of Degrowth is putting us on the spot. By opening us to new approaches and cultures, it enriches us. Furthermore, it links already-existing initiatives and endeavours close to the ideas of Degrowth, which exist oblivious to the political project. The same scenario is taking place in Hungary, where the term Degrowth as just been translated: Nemnövehedés, and it is just the beginning of a long debate.

On March, 23 – 24, 2010 Degrowth took its first step, thanks to the financial support of the French Embassy in Hungary and, above all from the enthusiasm of Zsuzsanna Balogh-Sarközy; Serge Latouche’ s translator: Farewell to Growth (Petit Traite de la Decroissance Sereine).
Serge Latouche was in Budapest for the launch of his book and he took part in three very successful meetings. It all started with the presentation of the book at the Institut Francais de Budapest (French Institute in Budapest) to a packed amphitheatre. The next day, we had nothing better to do than to go to a temple of the economy to debate economy as a religion during a seminar on Degrowth at the prestigious Cornivus University, previously named Karl Marx University.
Lastly, during the evening, a debate with Hungarian economists took place in one of the hot spot of conviviality, culture, alternatives, and festivity that only Budapest can offer (Gödör Klub).

To my great surprise the book, hence degrowth, was rather well received with warmth and enthusiasm by our Hungarian friends with few direct objections, and few caricatures as it is still often the case in France. In fact, the audience was attentive, but somewhat disappointed: “Were are the concrete propositions? Many comments during conferences or on the net lead to the same conclusions: “Yes, growth society brings us to the brink, but what can we concretely do to avoid the crash?”

It is all happening in Budapest

As we have seen in Western Europe, people all over are becoming aware of the unsustainability and absurdity of growth society and this is speeding up in Hungary. I came back to live in Budapest in January after having spent the last three years in France. I was rather surprised by the dynamism and the multiple alternatives, which have been set up here in such a short time. In fact, besides the NGO such as Vedegylet, who are radical critics of the impasse growth society has ambushed us in. I came across a few projects: the city-in-transition project at Werkele: one of Budapest suburb, the many community gardens popping up everywhere in Kecskemét. I also came across an association defending local growers markets “ Szeretem a paciot”: (“I love my market”).
It is worth noticing that Budapest hosts the biggest cyclists gathering in the world: Critical Mass], 80 000 cyclists gathered there in April 2006. In a similar vein, a new ecologist party “Lehet Mas a Polika” (“Another politics is possible”) took part in the last elections. To this day it has 15 parliamentarians (7,5% in the 2010 national elections), some of whom are degrowthists.

Another interesting project: a co-operative with the Romani peoples is to be found in A Igrici: a village situated in the poorest region of the North East. Faced with high unemployment, these peoples, with the help of some associations, have decided to borrow money for the purchase of land to grow vegetables. Even though this social project was fraught with difficulties, it is now enjoying a certain success..

For better or for worse?

Today, Hungary is plunged into asocial and economic crisis where some entire regions are facing starvation, whilst simultaneously the extreme right is gaining ground, sending its militia marching into the villages and threatening the Romani populations.

Furthermore, Hungary forbids the use of OGMs despite the pressure from the European Commission. It is the beneficiary of a moratorium, validated by the European Union, which forbids foreign investors to purchase land.
Hence the price of land remains very cheap and crops are shielded from a destructive development for the social fabric as well as for the environment.
Moreover, an ambitious long-term strategy of relocalisation has been proposed by some government members under the auspices of the Ministry of Agriculture and Rural Development.
This project promoting agriculture of proximity, the creation of local jobs, and a transition towards food self-sufficiency is the object of a national debate in Hungary. A public consultation is taking place. But some lobbies are bound to oppose a project going against their own interests.

Finally a few meetings are on the horizon. For example, a colloquium on local networks could well be the opportunity to insist on politics of transition towards food sovereignty. The time for awareness raising about the absurdity of growth society is over, it is time to set society on a path of democratic transition towards sustainable and desirable Degrowth societies. Critcism, despite being necessary, does not suffice any more. For the better, with the implementation of the above-mentioned project, or for worse with the exacerbation of inter-ethnic relations during an economic crisis, Hungary could therefore become a laboratory of the best models towards transition societies.